skip to main | skip to sidebar

South Pole and Breakfast with Prince Harry…well, sort of… 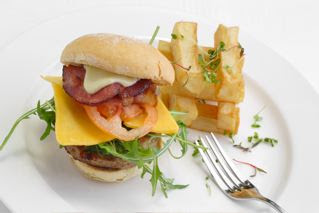 We’ve been out sampling restaurants again.

A few weeks ago we attended the Good Food and Wine show at the Convention Centre and found a restaurant’s booth that was selling delectable canapés. We decided to make a lunch of them and were so impressed with the food that we determined to actually visit the restaurant to see what they could do on a larger scale. Imagine our surprise and delight to learn that this restaurant, Southpole, is located in our neck of the woods!

Tuesday was a public holiday in South Africa and Hubby had the day off, so we spent the day just leisurely cruising the malls (where I found some great German kitchen gadgets) and having a solid German lunch at Cape Town’s only microbrewery, the Paulaner Brewery at the Clock Tower at the V&A Waterfront. Hubby, kind soul that he is, often gives me the day off from kitchen duty on weekends and holidays, and Tuesday was no exception. We decided to have dinner at Southpole, as we had been meaning to try it ever since we discovered their canapés. It was quiet that night, so we got a booking easily, and headed off with high expectations. 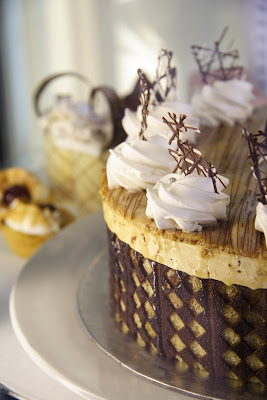 They did not disappoint. From cheerful service to superb menu choices, I have to give the place five stars…if there were six stars, I give them that. Quite simply, this is the best restaurant in Cape Town. Although the cuisine is different, in quality of both food and service, it easily rivals Reuben’s in Franschhoek, which has been named the best restaurant in South Africa at least once.

We liked it so much, we went back the very next night. Both nights, I had a filet mignon and both times it was superb. The meat was fine-grained and generously cut (it was the biggest 250 gram piece of meat I have ever seen!), and perfectly prepared…I like my beef rare and this was exactly that, without being cold or mushy in the middle. Hubby ordered the R95 set menu and he pronounced his chicken liver starter (pretty much his standard starter in any restaurant that offers chicken livers) to be the best he had ever eaten. Last night we had the chef’s special, a “surf and turf” that consisted of scallops (almost impossible to find in South Africa!), calamari and another one of those fabulous fillets. I don’t like calamari, so the chef kindly substituted an extra scallop for me. I ordered the prawn cocktail for my starter and, frankly, I am ordinarily appalled at the way prawns are served in this country…with the heads on and those beady little black eyes and waving antennae staring up at me…just grosses me out!. The chef kindly shelled the little critters for me so that my plate arrived with the beautiful curls of prawn tails nestled atop a small mound of salsa-type vegetables, beneath which was a tasty, tangy sauce. 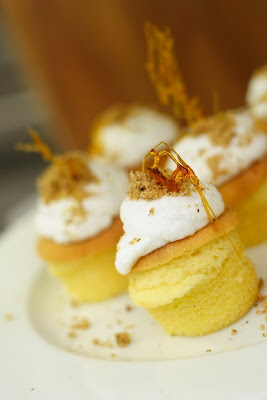 For dessert I ordered the lemon meringue ice cream, fully expecting a scoop of yellow ice cream in a fancy dish with a creative bit of garnish. Boy, was I in for a surprise! The dish that arrived was indescribable, but it was creamy, ice creamy, and it tasted exactly like a lemon meringue pie. There was a thin slice of meringue on top and the experience of eating it literally beggars description. Suffice it to say, I hope this is a regular menu item, as I can see myself eating it again. We have, in fact, found a new favourite restaurant, and a worthy successor to Dale’s Place (back when Dale was running it, of course).

OK, you sceptics who think that no place on the Dark Continent can possibly compare with the French Laundry or Atelier…you have to understand that food, in Cape Town, can be a near-religious experience and it is done very, very well here. We have a Wine Country that easily holds its own against Napa and Sonoma, and the rich and royal of Europe holiday here, their expectations of what they put in their mouths being higher than most of us mere mortals ever hope to experience.

Speaking of the rich and royal…I had breakfast with England’s Prince Harry on Sunday…well, sort of…I think…

Maybe I should explain…Sunday was another one of those events at the Convention Centre and this time it was a book fair. On Sundays Hubby and I like to do things early and get home before the churches disgorge the faithful who then clog up the roads, restaurants, and entertainment venues. So we decided to breakfast at the hotel across the street from the Convention Centre, which used to be the Arabella Sheraton and has now changed hands and acquired a lengthy and pretentious name: The Westin Grand Cape Town Arabella Quays. The morning buffet at the Thirty7 restaurant hasn’t changed, however, and Hubby happily immersed himself in a full English breakfast and then some, while I luxuriated in waffles with berry compote and salmon rosettes with capers and cream cheese.

One table away, up against one of the tiled posts, attractive, fresh-from-the-shower young maidens of a marriageable age began to accumulate, their wet hair testimony to their haste at arriving at the breakfast table. None of them looked familiar and I paid little attention until two young men arrived, one a rather scruffy fellow badly in need of having his unruly mop of dark locks shorn, the other a squeaky clean young man in a white T-shirt with a longish ginger brush cut. I went back to my breakfast, thinking he looked vaguely familiar, but that tiled pillar prevented me from seeing more than a partial profile.

Then he got up to go get some food and stepped fully into my view. I swear to you, if he was not Prince Harry, there is a double of the man hanging out in Cape Town, breakfasting at 5-star restaurants, surrounded by nubile, eligible young maidens!

Your comments welcome! Anonymous comments are enabled as a courtesy for people who are not members of Blogger. They are not enabled to allow people to leave gratuitously rude comments, and such comments will not be published. Disagreement will not sink your comment, but disagreeable disagreement will.

The content of this blog is protected by international copyright law and is the sole property of the blog owner. To request permission to copy or otherwise use any part of this blog, leave a request and your email address in a comment on the most recent entry.

People who like my blog--please feel free to add your name!

Where in the world...

A View from the Other Side